I’m back with an early post, since I know everyone will be busy with family and friends and important things like eating loads of ham this weekend. After last week’s post on The Claw of the Conciliator, we continue with the next in the series, The Sword of the Lictor. And wow, is this one a doozy. 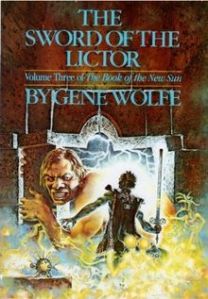 Where Claw of the Conciliator left off in a seemingly out-of-nowhere event, and bafflingly without any kind of real conclusion, Sword of the Lictor opens after skipping what would normally be the climax of the quest: Severian has already gotten to Thrax and settled in as the new Lictor there, serving the archon by running the prison and performing excruciations and executions. Dorcas is with him, still, and Dr. Talos and Baldanders have long since returned to Lake Diuturna.

Once again, the story is set in motion by Severian’s compassion: he is ordered to strangle a noblewoman for her infidelity (and for making the local archon look bad), but he instead lets her go.

(One thing that must be stated, and is one of the knocks on this series as a whole, is that Severian sleeping with pretty much every single woman he comes across gets pretty tiring.)

The result of his mercy is that Severian knows he must flee Thrax, and the only safe way is north, toward the war, where the Pelerines are rumored to be. The Claw of the Conciliator, still in his possession, becomes a great weight and motivator, driving him on a renewed quest. He undertakes this alone, as Dorcas’ origins are revealed, and she leaves to rediscover her old life.

It’s at this point that the story takes on the more traditional structure of a quest. Severian moves through episodes of action while traveling through the wilderness, hounded by enemies and seeking a (possibly) magical goal. While this may sound like a change for the worse, with the unusual structure of the first two books being such a great strength, it actually provides for some of the most striking moments in the whole series.

There are three that stand out, each for a different reason. The first is Severian’s night in the cabin and fight with the alzabo. Rarely have I read a scene so unsettling. Even after reading other scenes, the alzabo was rooted in my mind for days.

The second is the encounter with Typhon in the mountains. Again Wolfe establishes an obvious sense of eeriness, but instead of using a creature of horror, he turns the tension into a human encounter. What follows is a troubling dialogue between Severian and Typhon, and one that leaves a question hanging over the rest of the series: how did this inform Severian, whether consciously or unconsciously?

The third and final scene that holds great importance is the climax, when the true nature of Dr. Talos and, especially, Baldanders is revealed. Here Wolfe’s deft touch with description paints a vivid picture for the reader while leaving certain details vague enough to plant seeds of wonder.

Indeed, if there is one word that can describe this book, it is wonderful, in the most pure sense.

I will not go into further detail, rather keeping some more for my final article on Citadel of the Autarch next week, and mostly for an in-depth analytical essay I’ve begun on the series as a whole. I have no idea how long that will take me, but when I finish it, I will certainly post it here.

Anyway, The Sword of the Lictor is a brilliant book, encompassing many of the things that fantasy readers love, and pushing them to the limit. The text remains dense with meaning and necessary contextualization for previous passages, alerting the reader that multiple reads are absolutely necessary if one wants to gain a fuller understanding of the story. The Sword of the Lictor is worth five stars, and is quite probably the best book I read in 2015.