The last true book review I did on here was The Bands of Mourning—16 months ago. (I promise this isn’t the first book I read between then and now.)

As this is the second in a series, there is one large spoiler for Heroes Die after the jump. 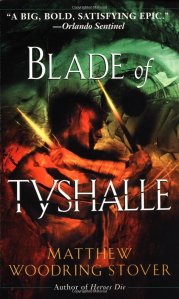 Blade of Tyshalle picks up seven years after the events of Heroes Die, with Hari Michaelson a cripple, but married to Shanna Leighton and foster father to Faith—the daughter of Shanna and Karl Shanks (Lamorak).

Hari is now in charge of the San Francisco Studio, and he hates his life.

To say that this book is a dramatic departure from its predecessor would be both honest and misleading. Heroes Die is an adventure story, through and through, packed with heroes and villains and people falling somewhere in between. It follows a logical progression, with pitfalls and mountains to climb, daring rescues and breathtaking duels, moments of choice and moments of catharsis.

Blade of Tyshalle is not this. Blade is not an adventure story. Rather, it’s a conversation of myth and philosophy, given the trappings of dark fantasy, and shoved off a cliff.

That’s not to say that Stover’s trademark prose, wit, and grasp of character are not present. It’s certainly not to say that his gripping action scenes aren’t here, nor his flair for the dramatic absent.

But where Heroes Die was a breakneck-paced story of immediate action and exigencies, Blade of Tyshalle is a long-form treatise on just how horrible and meaningless life can be.

This book took me a long time to read. It was not due to pace, but due to content. There is a piece of writing advice that I’ve heard in many different forms: Think of the worst thing you can do to your character—then do it.

Matthew Stover took that advice to heart, and then even further. He thought of the worst things he could do to the reader, and he did them.

Blade of Tyshalle spends so much energy crushing every aspect of hope, of goodness in the characters’ lives, and did it in such horrific fashion that it was actually exhausting to read.

And yet…the climax of this book was incredible. The redemption of characters was touching. The profound exploration of what it means to choose to live your best life gives this book an uplifting yet melancholy ending that only a writer of surpassing skill could manage. His myth, which is told in snippets at the end of each chapter, is compelling and intriguing.

Stover is fast becoming one of my favorite authors, between his excellent work in the Star Wars Expanded Universe and the Acts of Caine. He effortlessly mixes humor, action, character, and theme. His ability with the written word is admirable.

And yet, I give Blade of Tyshalle only 3.5 stars. This is a difficult book to read. The relentless destruction of the main characters is necessary for their eventual resolutions, but is exhausting. It’s depressing. It’s stomach-turning.

This is not a book for everyone. But for those with the fortitude to reach the end, it’s worth it.

3 thoughts on “Blade of Tyshalle – A Review”