The Book of the Week is back, and this time it’s not a Mistborn novel! I promise.

We’re going back quite a few years to a science fiction classic that, in my opinion, doesn’t get a whole lot of the love it deserves: Out of the Silent Planet by C.S. Lewis. 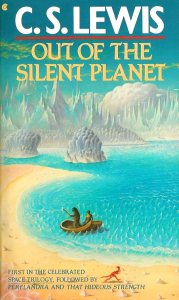 Out of the Silent Planet is the first of Lewis’ Space Trilogy, and I’ll admit that my recent reading of it was a very different experience from the first time (which was probably sometime around 4th or 5th grade…it’s been a while). There were very few things that I remembered about the plot and almost nothing about the characters. The result was a pretty fresh take, and I was impressed.

For one thing, after reading so much modern literature, I was struck once again by the elegance of Lewis’ prose. There is a certain elevation to his word choice that, combined with the fantastic nature of the story, produces the kind of narrative which just envelopes the reader. It’s easy to get lost in the pages.

Of course, where C.S. Lewis is concerned, you cannot ignore the fact that his writing is allegorical on many levels, and deeply introspective. Where lots of science fiction seeks to guess at the future of technology and its effect on humanity, the Space Trilogy is really more of a science fantasy—there is no real hard science here, and with the exception of a space ship that only serves to move characters from one planet to another, technology has no bearing on the story.

Rather, Out of the Silent Planet is a reflection on the essence of humanity, the reality of living in a fallen world, and the protagonist Ransom’s fantastical opportunity to experience the unspoiled world of Malacandra. Though Ransom is a grown man, a linguist, and a doctor, he gains almost childlike attributes when confronted with an utterly alien—yet wondrous—world, growing in understanding over time.

If there were just one word, in fact, that I would say encompasses Out of the Silent Planet, it would be “wonder.” From the plot, to the prose, to the character, to the underlying morals, everything revolves around a sense of something larger, something grander than we know here on Earth. I give Out of the Silent Planet four stars out of five, and recommend it to everyone who enjoys a quick, enjoyable, and thought-provoking read.