The weeks keep flying by on me, and it’s time for another installment in my progression through The Black Company features as my Book of the Week. This time around, we’re getting to the conclusion of the Books of the North (sort of…) with book three, The White Rose. 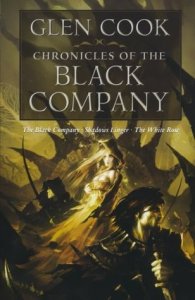 The White Rose is, quite honestly, a weird book. I have mixed emotions about it: it’s probably my least favorite in the series, but it’s still a pretty good book overall and has one of my very favorite scenes in the whole series. The problem with it is its structure.

In The White Rose, we pick up a couple of years down the road from Shadows Linger. The Company is in open rebellion against the Lady, they’ve found the White Rose, and they’re waiting for the prophetic comet to come around again. However, in the interim, they lost a massive battle at Queen’s Bridge and were forced to flee into the relative protection of the Plain of Fear—while leaving behind the bulk of the Annals. Croaker isn’t happy about that, of course.

So we have the main storyline with Croaker’s 1st person recordings in the Annals. We have a secondary storyline in the Barrowland, from a 3rd person POV of a mysterious man named Corbie. On top of that, we have a tertiary storyline recorded in the POV of Bomanz, the infamous wizard who resurrected the Lady and the Taken.

The Plain of Fear storyline has its ups and downs, but the jarring jumps in time and place are what slow the narrative here. In the end, though, the mysteries have satisfying answers and the conclusion is suitably bombastic.

But one scene in particular redeems any problems the book might have, with one line that says so little and at the same time so, so very much:

I’ll leave it at that, for the sake of those who haven’t yet read the book.

So, in the end, The White Rose is a flawed book with a fun conclusion that hits home in a profound way, and features a few sparkling gems along the way. I rate it three and a half stars out of five.