I’m back from a week-long business trip, settled in, and it’s time to get back to the Book of the Week. We’re going to be taking a brief break from the relentless march of the Black Company to look at a book that took me completely by surprise: Sabriel by Garth Nix. 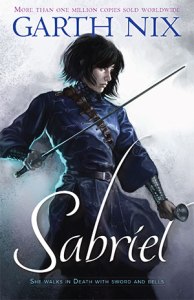 I will admit, this both was nothing like I expected. I’m not entirely certain why, but when I first sat down to read it, I expected a YA romp geared for teenaged girls. WOW, was I wrong about that.

Sabriel pulled me straight in with one of the best prologues I’ve read in a while, one of the few that actually served a solid purpose for the story and in setting up some of the rules of the world (but leaving just enough a mystery that I was totally gripped).

From there, we got to know the titular character through a pretty basic setup, with a plot that naturally allows worldbuilding while retaining a very dark tone and some great, creepy imagery. The supporting characters, Mogget and Touchstone, served a solid purpose—but Mogget is the one that truly stood out. Initially presented as a cat that talks and is clearly magical, Mogget is full to the brim with snark and sarcasm. He’s just great. Touchstone, on the other hand, felt a bit flat as a character. His backstory is enthralling, but his character arc seemed lacking.

As far as the writing goes, it’s functional at worst and sparkling at best, with some great scenes of dialogue and truly chilling moments. Nix builds a world around his characters that carries the story more than any of them. Sabriel is a solid fantasy offering that delivers a completely new type of protagonist, while staying true to the conventions of the genre. I give it four out of five stars. Definitely recommend.