Let’s be frank here: every writer is going to have a unique approach to writing a book. I’m not going to sit down and say “you have to do it this way!” For one thing, that would be bad advice. For another, it would be wildly hypocritical. I’ve written three novels, and each was approached in a wildly different manner.

As most writers probably know, there are two general types of writers when it comes to novels. There are “plotters” and there are “pantsers,” or, as George R. R. Martin famously put it, “architects” and “gardeners.”

Essentially, architects and plotters take a methodical approach. These are the writers who make extensive notes before writing even a word of the manuscript. They have outlines many pages long. They map out every step of the journey—though of course things change during the process of writing the manuscript.

Pantsers or gardeners take a looser approach. They have an idea or a “seed,” as GRRM put it, and they plant it. Through the course of writing, that seed grows and the writer tends to it, cultivates it and works with it as it evolves. They write from the seat of their pants. If you’re familiar with National Novel Writing Month, you’ll be intimate with this process, as that challenge almost demands a pantser approach.

Now, there’s not really anything wrong with either approach. Many writers will swear that outlines are the death of their creativity. They’ll go on at length about how the characters make their own choices and drive the story. Others will be incapable of turning out a complete draft unless they know all the steps in advance. Brandon Sanderson and Robert Jordan were such writers, each accumulating hundreds of thousands of words of notes and outlines before sitting down to write the actual books.

But here’s the thing. Not every writer will fit neatly into these categories. Like many things in life, the writing process is a spectrum.

When I wrote my first novel, I took a very loose approach. I was definitely a pantser. I had maybe three pages on handwritten notes, total, for what I planned as an epic fantasy trilogy. The result was very much not pretty. Most days I sat down to write, I’d end up re-reading for 30-45 minutes just to find my place again and remember where I wanted things to go, where my head was at when I stopped the night before. The story was haphazard, wandering, and just plain bad.

So I overreacted. For my second novel, I spent five and a half months writing the most detailed outline I could. It ended up clocking in at 158 pages, single-spaced. I had whole conversations outlined, including full lines of dialogue and specific actions for characters to do. I burned myself to a nub writing that book, and it ended up excruciatingly boring.

So I found myself stymied. I tried to be a gardener with one book and was met with failure. For another I tried to be an architect, and it fell flat. I needed to find a balance.

With All Flames Cast (and the invaluable program that is Scrivener) I found that balance with my checkpoint system. 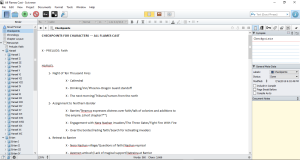 With this approach, I work from a top-down perspective. For each POV character, I name the major plot arcs in the book. In All Flames Cast, this came out to about four or five arcs per character. Once I have the overarching narratives mapped out, I take it a level deeper. I make a checkpoint for each event that needs to occur to complete the plot arcs, and write a brief sentence or two describing it. These end up each being a chapter.

From there, I allow myself to be done. Certain chapters demand I go another layer deeper, with checkpoints for scenes in the chapter; for others, the chapter-level checkpoint is sufficient.

Now, I have a working checkpoint outline. With the accessibility and layout of Scrivener, I can work on a new chapter or scene with the checkpoint description right there for reference. It provides a solid backbone for my story, keeping me in line and in touch with the overall plot—but also allows me some flexibility as I work through the draft. There were major changes that occurred during the first and second drafts of All Flames Cast, and I could easily adapt them by making small changes to the checkpoints. Everything stayed in line.

The flip side of this character-by-character checkpoint layout is that I have to make a unified chapter layout.

This requires a timeline/chronology page, so I can keep straight when respective chapters take place and how they work together. With Scrivener’s easy format, I can have my checkpoint page, my chapter layout, and my chronology page grouped together, just a click away. As I finish chapters, I can go into my chapter layout and put that awesome-looking bold X next to them. It’s a nice way to visually track and motivate myself as I progress through.

Ultimately, what I end up with is a nice blend of gardening and, uh, architecting. (I don’t think that’s a word, but whatever. I’m a writer, and I get to make things up like that.) It’s my healthy balance, and it’s made me a much more productive writer.

Any writer out there needs to find a balance for themselves. It’s one of the great remedies to writer’s block, and it fosters not just productivity but an improved sense of accomplishment—which can be one of a writer’s biggest struggles.