Yeah, yeah. I know. I didn’t do a Book of the Week last week. The truth is, moving is the worst thing and drives me nuts and I completely lost track of what day it was. By the time I realized I needed to do one of these posts, it was Sunday night and I was just beginning to get ready for a new work week.

Anyway, you actually get a Book of the Week this Thursday. And this one is going to stick with the same genre theme as the last one I did. This week’s is I, Jedi by Michael A. Stackpole. 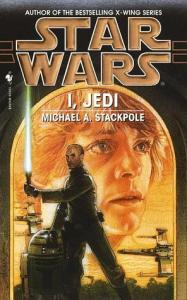 Yup. I’m recommending a Star Wars book. The reasons for this are varied. For one, this is a unique book among the many, many Star Wars novels published over the years; for another, it’s one of the very best.

And most importantly, I’m still bitter about the death of the Expanded Universe, and I want to talk about how very awesome it was.

I, Jedi is a book that has a little bit of everything. It’s got the typical space battles and action-packed X-wing (and other starfighter) scenes that you’d expect from Stackpole. It’s got the fantasy side of Star Wars, with about half the book dedicated to Luke Skywalker’s first class of Jedi students at his new Academy. It’s got mystery, espionage, romance, and one of my very favorite characters in the EU.

It’s also the only Star Wars book written in the first person.

Though it’s not the first time, chronologically speaking, that Corran Horn is introduced into the EU, I, Jedi is definitely the most essential book for understanding his character. In this book, Corran’s wife is abducted and he must come to grips with the two very different sides of his heritage in order to rescue her. His background as an officer in Corellian Security first, and ace pilot in Rogue Squadron second, comes into conflict with his genetic heritage as a Force-sensitive man and future Jedi.

The book is basically split into two parts, one dealing with each aspect of Corran’s background, and the first-person POV works great. I’m not a huge fan of first-person, in general, but I will certainly admit that it can be great when done right. And Stackpole absolutely did it right in I, Jedi. Maybe the greatest praise I can give for this book is that I didn’t even realize that it was written in the first-person until the second time I read it.

Yep. I was so engrossed in the style, the pacing, the depth of character, and the plot that I didn’t even register the perspective of the story.

The result is Michael A. Stackpole at his best—and he wrote many other, very good, books in the Star Wars Expanded Universe—giving readers a singular experience in one of the richest franchises in science fiction history. I, Jedi is an absolute must read for all Star Wars fans, especially those who have dabbled in the EU and liked what they read. I, Jedi gets a solid 5 out of 5 stars from me.